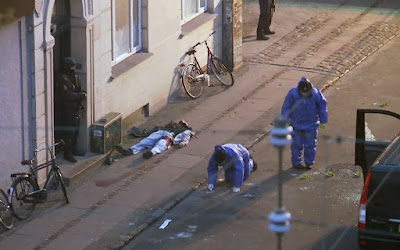 The cold-blooded and depraved murder of the two young women failed to satiate terrorist’s lust for blood. After murdering his second victim, he ran toward soldiers patrolling as part of Operation Sentinelle, who shot him dead. In Western Europe, this is the new normal but the situation is particularly acute in France, which has experienced a rolling wave of terrorism since 2012. The country currently resembles an armed camp with the deployment of thousands of soldiers and police armed with automatic weapons, patrolling sensitive locations. But apart from increased security, France appears unable or unwilling to do more to counter the threat.

The Marseille slaughter could have easily been prevented but French authorities imbibed with a combination of political correctness, laziness and just plain stupidity, allowed it to occur. The terrorist who committed the gruesome attack was known to law enforcement. He was a recidivist whose rap sheet included a laundry list of petty crimes. In fact, just days before the attack, he was arrested for shoplifting but inexplicably released despite the fact that he possessed at least seven fake identities. The man, who informed the police that he was homeless, had given them a Tunisian passport in the name of Ahmed H, born on November 9, 1987 at Bizerte. But a quick fingerprint check would have revealed that he was lying through his teeth. Unfortunately, the fingerprint verification was performed after the Marseille slaughter.

French law enforcement officials attempted to deflect responsibility by claiming that the man had no known terrorist ties and that shoplifting offenses generally result in a police report and a court summons to appear at a later date. The proffered excuse is disingenuous at best. For years, French law enforcement officials have been cognizant of the nexus between criminal activity and radical Islamic terrorism. Several well-researched and detailed studies have confirmed this interconnection. In fact, as many as 80% of those who have committed terrorist attacks in the UK, France, Belgium, Germany and elsewhere in Western Europe in the name of Islam have criminal records with lengthy rap sheets that include drug dealing, petty larceny, assault and identity theft.

As noted, the terrorist who committed the Marseille outrage was a serial shoplifter and an identity thief. Khalid Masood, the UK terrorist who carried out the Westminster car-knife attack in March had a number of convictions for causing Grievous Bodily Harm (GBH) possession of offensive weapons and public order offenses. Kobili Traore, the Muslim man who brutally beat elderly Jewish pensioner Sarah Halimi, while yelling Islamic and anti-Semitic slogans, and then proceeded to throw her out of a third-floor window to her death had spent several years in prison for acts of aggravated violence and drug dealing. Amedy Coulibaly, the terrorist who stormed the Hypercacher kosher supermarket in Paris killing four, had previously been jailed for dealing in stolen goods, drug trafficking and robbery. Brothers Ibrahim and Salah Abdeslam, who were part of the gang that perpetrated the deadly Paris attacks in November 2015, were drug users and traffickers. The bar the duo owned in Molenbeek, a district of Brussels, was shut down by police for being a drug den.

The list is endless. There exists a symbiotic relationship between Islamic terrorism and non-ideologically driven criminality. For the hard core or petty criminal, Islam represents a pathway for redemption. The terrorism component enables the assailant to continue his violent or deceitful activities while claiming that these activities are being performed in the name of Allah. Some violent recidivists are simply drawn to the cruel and sadistic aspects of radical Islam.

Islamic terrorists frequently recruit from the rather large pool of criminals who domicile in Western countries but feel no loyalty to their host countries, despite the fact that these liberal democracies often provide them with outrageous entitlements including subsidized housing and stipends. The Islamist recruiter offers the criminal a pathway for redemption through religion but at the same time, takes advantage of the skills offered by the criminal to implement the terrorist scheme. For example, a drug dealer can use proceeds to finance a terror operation while an identity thief has the know-how to either forge or illegally obtain identity papers. The violent felon is often knowledgeable in the use of firearms or has the necessary connections to obtain illegal firearms and explosives.