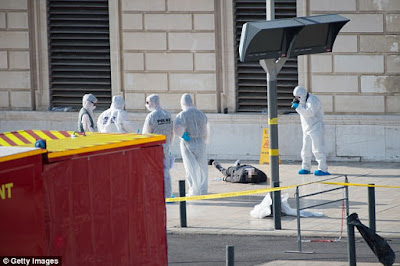 What basic questions do Europeans face?
Lacking sufficient children, the question is whether Europeans will they continue passively to accept whomever turns up, even if they lack skills and come from a largely hostile culture or whether they will develop a plan of controlled immigration, selecting people around the world most suited to bring skills and fit in? Germany's decision to open the borders meant choosing the former option.

Why are relations between Europeans and Muslim immigrants so fraught with tension?
They are fraught because Islam is an imperialist faith and many Muslim immigrants want to replace existing European civilization with Islam. Exacerbating matters, Europeans and Muslims are opposites on several key issues: Europeans have a low birthrate, Muslim immigrants have a high one. Europeans have a weak religious identity, Muslims have a strong one. Europeans feel guilty for their historical sins; immigrants have boisterous confidence in the superiority of their civilization.
Many Germans argue that as a rich nation, they morally must open their doors to people in need.
I admire that humanitarian impulse but it is unrealistic. Can Germany take in, say, 2 billion people? If not, how does it morally pick the tiny percentage it does allow in?

Is it not strange that migrants from Syria and Iraq move to places like Germany and Sweden? They would be better off going to Saudi Arabia and Kuwait, where the climate, the language, the religion, and the mores are all like their own; plus, these countries are much closer to Syria.

What, then, is the answer?
Practically speaking, see the world in terms of cultural and geographic zones: Westerners in need should stay in the West, Middle Easterners should stay in the Middle East, and so forth around the globe. Is it not strange that migrants from Syria and Iraq move to places like Germany and Sweden? They would be better off going to Saudi Arabia and Kuwait, where the climate, the language, the religion, and the mores are all like their own; plus, these countries are much closer to Syria

Cultures and customs change. Perhaps Muslims will adapt to European cultures if given the opportunity?
In theory, yes; in practice, no. Experience shows that the first generation of Muslim immigrants to Europe is more adaptable than its children and grandchildren, as cultural separation increases over time. It is hard to find any place in Europe where Muslim immigrants have assimilated, leading me gravely to doubt that this will take place in the future. Chileans, Chinese, and Congolese fit better into European culture than do Muslims.

Many Muslims of immigrant origins point to discrimination as a factor hindering them from fully integrating into German society.
Yes, discrimination is a problem. I would not want to be named Muhammad and look for a job in Hamburg. But that supports my argument that it is better to be named Muhammad in Saudi Arabia or Kuwait. Why push together peoples who, as the last 55 years have shown, cannot live easily together? As Thilo Sarrazin has showed, the experiment of Muslim immigration has failed; continuing it will increase tensions.
You stress that Islamism, not Islam, is the threat. How do you define Islamism?
Islamism is a specific understanding of Islam that holds if Muslims wish to return to the riches and power of 1,000 years ago, they must apply the Islamic law in its entirety. Islamists argue among themselves how to do so: the modern-oriented Gülen movement in Turkey represents one extreme and ISIS, which wants to return to the seventh century, represents the other. Some Islamists use violence, others work through the political system. In this way, they resemble communists, with their major tactical differences but similar goals

You describe "the Islamist threat" as "arguably the most consequential issue of our time" facing the West. Islamist terror can certainly do damage but how can Islamists threaten the West as a whole, given the West's dominant economic and military power?
I see Islamism as the third great totalitarian threat after communism and fascism, a seductive and powerful body of ideas that threatens our way of life. And just as we had to fight against the fascism and communism, we now must fight Islamism.

When you say that the West needs to fight Islamism, what kind of fight are you thinking of - cultural, political, or military?
Fighting violence is the easy part because murderous jihadi attacks are frightening and the West has police departments, intelligence agencies and armed forces competent to deal with this problem. Further, this low-level violence destroys property and kills people but cannot shift civilizations. Lawful Islamists, in contrast, by working within the system, in the political, educational, philanthropic, or media arenas, have a potentially profound influence. While I'd rather encounter a lawful Islamist rather than a violent jihadi on the street, only non-violent tactics change the face of society; and relatively few Westerners even notice what's happening.

How do you view Europe's response to Islamism?

Compared to 20 years ago, a great leap in awareness has occurred – but not enough yet to make a difference in policy. Virtually everywhere in Europe, political parties exist that make immigration and Islamism a priority, but almost none of them has been in power because these groups tend to be staffed by amateurs, contain too many extremists, and are ostracized. As a result, they cannot reach 51 percent.
Like the Alternative für Deutschland in Germany, the only party that consistently opposes Muslim immigration?
Precisely. The AfD is an excellent example of amateurs mixed with extremists trying to figure out who they are – liberals, Neo-Nazis, or something in between? As long as they leave this question open, their electoral potential is limited, and they are dangerous. But I expect that eventually the AfD will mature, and I think and hope it will move toward the mainstream for there clearly exists a need for such a party in Germany. But every year that goes by, the danger grows.

Will the anti-immigration remain excluded from power?
No, I expect this will change, that these parties will start to gain power within a decade.

The AfD stands below 10 percent in the polls while Merkel's CDU gets almost 40 percent. Does this signal that Germans are not that unhappy with Merkel's immigration policies?
I am surprised by and cannot explain the lack of a CDU challenge to Merkel.

Geert Wilders of the Netherlands, one of the most prominent politicians against Muslim immigration, has been put on trial for hate speech. Your organization helped cover his legal costs; why?
We at the Middle East Forum believe in the freedom publicly to state opinions on matters concerning Islam and Islamism, whether or not we happen to agree with that opinion. Toward this end, our Legal Project often helps defendants pay legal costs, including Wilders' a few years ago. I disagree with his views on who the enemy is (he says Islam, I say Islamism) but that is secondary; I will help him, as any Westerner, assert the right to talk about Islam without getting hauled into Court.

Is Donald Trump's "Muslim ban" a useful way to keep Islamists out of the United States?
The Trump administration's ban of the citizens of six majority-Muslim countries was well-intentioned but poorly executed. One should not look at a person's passport but at his ideas. Some Canadians are our enemies and some Iranians are our friends. Of course, ideas are more elusive than nationality. But banning certain nationalities does not offer protection; that requires a serious effort to know each person entering the country.

The city of Hamburg in 2012 signed an accord, a "Staatsvertrag" with Muslim groups such as Ditib, Schura, and VIKZ to regulate Islamic classes and holidays. Members of those organization have been accused of Islamism and antisemitism, yet the authorities cannot a find clean Muslim organization. Your comment?
Islamists are much better funded and organized than non-Islamist Muslims, in part because they receive help from Middle Eastern states such as Saudi Arabia, Iran, and Turkey. This permits them routinely to dominate Muslim life in the West, appearing on television, engaging in interreligious dialogue, teaching in classrooms, and (as in this case) partnering with governments.

You want Western governments to empower moderate Muslims but in Germany, only a few Muslims have showed up to protest Islamism, so who and where are the moderates?
Calls for mass Muslim support against Islamism always fail in the West. (Muslim-majority countries are another matter.) In part this results from a lack of funding and organization, in part to intimidation: it takes an awful lot of courage to be a Muslim and to come out publicly against Islamism. The new liberal Ibn Ruschd-Goethe mosque in Berlin is a good example: its founder, Seyran Ateş, has received death threats.

What should Western governments do?
Strongly support non-Islamist Muslims - and especially anti-Islamist Muslims. Islamists like Turkey's President Recep Tayyip Erdoğan claim there is only one kind of Islam, namely theirs. No: there are many versions of Islam and non-Muslims should reject, and certainly not enable, Islamist hegemony. Rather, brave anti-Islamists like Ateş should get official recognition and other forms of support.

Daniel Pipes is president and founder of the Middle East Forum and has authored 12 books., He is considered one of the world’s foremost analysts on the Middle East and Muslim history. He warned of militant Islam's war with the USA years before 9.11 and called Arafat's bluff at Oslo.