"A how-to guide for moving the American Embassy to Jerusalem"


A short four-step how-to guide for moving the American Embassy in Israel from its present
location in Tel-Aviv to Jerusalem.

To the President of the United States, attached please find a short four-step how-to guide for moving the American Embassy in Israel from its present location in Tel-Aviv, Israel’s cultural and economic capital, to Jerusalem, Israel’s political capital.
This guide will enable you, the President, to realize a clear campaign promise, support an ally, stand by those truly committed to justice and peace, end a long-standing but entirely nonsensical US policy, and as a cherry on top, expose hypocrisy.

Step 1:
Choose a location for the embassy in Jerusalem that is clearly west of the 1949 armistice line, also known as the 1967 line. This part of Jerusalem has been under undisputed Israeli sovereignty since there was a modern state of Israel. This part has nothing holy in it - it is humdrum neighborhoods (I know, I grew up there). Make a special effort to find a location that overlooks the most important sites in this part of the city, all conveniently located next to each other: the Israeli Parliament – the Knesset, the Supreme Court, the Government offices, the Hebrew University, and the new National Library. You will note that these are proud symbols of the achievement of Israel and Zionism, symbols of Israeli sovereignty, knowledge, and creativity. You could do no better than place the symbol of the friendship between our two countries in their proximity.

Don’t be tempted to place the embassy in the area that was the no man’s land before 1967, where some claim land has already been purchased for that purpose, and certainly nowhere east of the 1967 lines. This might not completely satisfy Jewish maximalists, but it is critical for the success of this move and for the ability to reach the above goals, especially the hypocrisy exposure one.

Step 2:
Make it clear in your statements that the move merely acknowledges what has been known for decades – the parts of Jerusalem west of the 1967 line undisputedly belong to Israel, and Israel has the sovereign right of every nation to place its capital in its undisputed territory. Add that this move will finally put to bed the fiction that the vast area that encompasses Jerusalem west and east of the 1967 line is a “Corpus Separatum” – a separate entity – that belongs to the international community, as envisioned in the UN 1947 partition proposal.

This fiction, as all good fictions do, never existed anywhere but on paper. It never existed for the simple reason that the Arabs rejected the partition proposal and opened war to prevent it from being realized, and in losing the war Jerusalem west of the armistice lines became undisputedly Israel’s, and Jerusalem east of the line entered an extended period of disputed claims.

Clarify that nearly 70 years after the end of that war, the US is finally ending an illogical policy that holds the undisputed status of Jerusalem west of the 1949 armistice line hostage to the ongoing dispute over Jerusalem east of that line. The US is done denying Israel a basic national sovereign right to establish its capital in undisputed territory. You can add a statement that the US continues to call upon Israelis and Palestinians to directly negotiate the future of Jerusalem east of the 1967 line, with a special call that any arrangement should be mindful of the importance of the holy places, found only in Jerusalem east of the 1967 lines, to Judaism, Christianity and Islam and secure freedom of access and worship to these sites.

This should minimize the threat of violence in response to the move, since such statements would allow Palestinians, Arabs, and Muslims who are not opposed to Israel within the 1967 lines a face-saving hook that would allow them to treat the US move as changing nothing, and therefore not deserving of negative response.

Step 3:
Call out those Palestinians, Arabs, and Muslims who are threatening violence over the US move for their real meaning: are they denying that Jerusalem west of the 1967 line clearly belongs to Israel? Are they laying claim to that territory too? After decades of asking the world to limit Jewish and Israeli claims east of the 1967 line, are they demanding Israel west of that line for themselves as well? If Palestinians, Arabs, and Muslims will oppose the US move, as outlined above, they are essentially saying that Israel even within the 1967 lines is illegitimate, and thereby expose their enduring maximalist claims.

As a long-standing supporter of the Palestinian right to self-determination, I have found that it is critical that Palestinian, Arab, and Muslim maximalists should be called out for what underlies their fury:  nothing less than racism plain and simple, a continued denial that the Jewish people, no more and no less than any other people, possess the equal and universal right for self-determination in their land. While those Palestinians, Arabs, and Muslims might react with violence, it is a violence that is based not on opposition to the move itself, but on a more base opposition to the very existence of the state of Israel. This is an important opportunity to clarify that America will not bow to that, and neither should any other country.

Step 4:
Call upon all other countries that have diplomatic relations with Israel to follow suit. Address your call especially to those countries that voted for UN Security Council Resolution 2334, that so thoroughly denied Jewish and Israeli claims east of the 1967 line, as well as to those countries who participated in the Paris Conference, which affirmed the resolution.

Their resolution, even if unintended, powerfully affirmed that there is absolutely no legal dispute or claim to Israeli territory west of the 1967, including Jerusalem. This legitimate interpretation of the language of the resolution provides sufficient legal basis for moving the embassy to Jerusalem west of the 1967 lines. Make it clear that the US will view as utter hypocrisy any country denying Jewish and Israeli claims east of that line, while refusing to take the most obvious step to acknowledge the undisputed nature of Israeli territory west of that line.

There you have it Mr. President, a clear and simple path to achieving a multitude of goals: swiftly realizing a major campaign promise, demonstrating your friendship to a long-standing ally, shaking stale beltway orthodoxies, standing up to maximalists and hypocrites alike, and actually taking a real step towards justice and peace for Israelis and Palestinians. Good Luck. 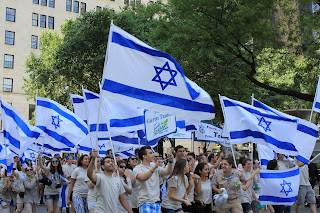