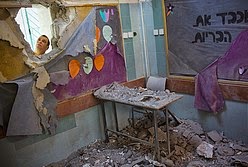 ﻿
A father celebrating his son’s birthday in a daycare center was hit in the back by shrapnel as he pushed the small children in the room away from the window on Thursday morning around 10.
Seven mortar shells struck inside the small kibbutz in the Eshkol region, a short distance from the Gaza border, including one that slammed through the roof of an alternative medicine center, creating a crater-like hole in the floor.
A number of other kibbutz buildings were also damaged, including the dairy farm, Artal said, as he walked outside and over to a lawn in front of two daycare buildings.
But the real damage came from the shell that hit near a tree on this lawn, he said.
He showed The Jerusalem Post how a piece of shrapnel had flown from that mortar shell and through an open window into an otherwise protected space in one of the daycares.
“No one realized the window was open,” Artal said, but the father still instinctively pushed the children away and helped them lie on the floor. As he did that, he was wounded.
“He helped save them, but he himself was hurt,” said Artal, and added that the father is recovering in Soroka University Medical Center in Beersheba after surgery.
(....)
On Wednesday, there were 37 warning sirens in her moshav, but only one rocket caused damage. But residents had to race for cover several times an hour.

On Thursday, there were 10 warning sirens, and another rocket that hit next to a few homes. Some 50 of the moshav’s 230 families have already left again, she said.