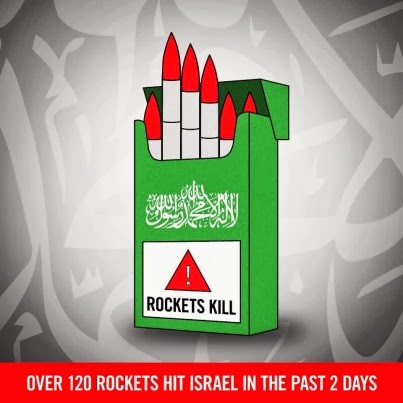 The Long War Journal rapporterar:﻿
Palestinian Islamic Jihad (PIJ) and other Palestinian terror groups, including Fatah's al Aqsa Martyrs Brigades, launched dozens of rockets and mortars from Gaza towards southern Israel yesterday. The barrage of rockets and mortars was the most significant in a single day since Operation Pillar of Defense in November 2012.
In a statement posted on its website, the al Quds Brigades, PIJ's military wing, said that "Operation Breaking the Silence" comes in response to "Zionist aggression" in Gaza, Jerusalem, and the West Bank. The Iran-backed terror group specifically noted Tuesday's airstrike in Gaza that killed three PIJ fighters who had fired mortar rounds at Israeli forces.
PIJ fighters fired 130 rockets and mortars, the group claimed. Israeli officials said only 60 hit Israel, however. At least three of the rockets were intercepted by the Iron Dome missile defense system.
It is likely, though still unclear, that a number of the rockets and mortars fired by PIJ and the other groups landed in Gaza. Both PIJ and the IDF released video of some of yesterday's attacks from Gaza.
According to Israel's Shin Bet, in all of 2013 only 74 rockets and mortars were fired from Gaza towards Israel.

In response to yesterday's rocket attacks, the Israeli Air Force struck at least "29 terror sites in the Gaza Strip" last night. "The IDF will do everything in its power to fight Gaza terrorism and protect the people of Israel," the Israel Defense Forces said in a statement. Officials in the Gaza Strip said the targeted sites belonged to PIJ and Hamas, the Associated Press reported.
Hamas, which has did not claimed responsibility for any of yesterday's attacks, said Palestinians have a right to defend themselves in the face of Israeli aggression. In a brief statement, the State Department called yesterday's attacks from Gaza "reprehensible" and noted that "Israel, like any nation, has a right to defend itself."
Israeli officials have expressed concern in recent weeks about escalating violence emanating from the Hamas-run Gaza Strip. "The situation is stable, but we are seeing a creeping escalation," one military official told the Jerusalem Post in late February.
***
Läs mera
Upplagd av hcp kl. 10:53